It's Veterans Day week, which is a shock to me. Where did the year go? I had great plans and somehow failed to follow through to complete or even start a great deal of them! I vaguely recall a New Year's pledge to write at least 3 blogs a week without fail. Uh-oh! That plan failed to materialize. So much has been going on.

Military members are seldom allowed the privilege of letting other things get in the way. They have a mission to pursue and complete, with an overall purpose of protecting the citizens of the country for which they serve. There's a commitment to die, if necessary, to accomplish that goal.

There have been many times in my life where one member of the family or another was on military duty during a special holiday or festivity. One year I ate Thanksgiving Dinner at Shakey's Pizza with other soldiers thousands of miles away from home.

I would feel ashamed to let the day pass without commenting about my respect for everyone who pledged to protect their country. Sometimes all it takes is a visit to a museum or
memorial to understand the hardship and challenge for survival.


If you ever travel through Hawthorne, Nevada, plan to spend some time looking at the equipment and munitions at the Hawthorne Ordnance Museum. It's free to look and you may encounter a veteran who used the equipment at some time.

Who hasn't had a family member serve in the Army, Navy, Air Force, Marines, or Coast Guard? Take a few minutes to say "Thank You!" because it hasn't been said enough.

To all veterans, thank you for daring to serve and being a good example of patriotism and bravery.

Are you doing anything special in recognition? For readers and bloggers in other countries, how do you honor past and present veterans? 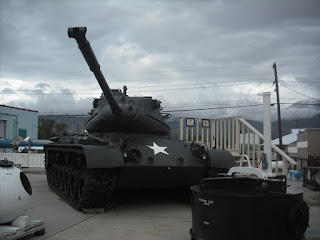