It’s just hours away by jet, but for now I have to admire Castle Grant with pictures taken by others. My dad always wanted to travel to Scotland, but never had the time. Well-versed in the history of Scotland and the responsibilities of the clan laird, he taught us the importance of caring for one another and debating or fighting for what’s right.

On long trips, we listened to ballads like the Skye Boat Song. The Battle of Culloden was the last land battle fought in the UK, and aye, the blood was spilled – oops, sorry, that was my dad’s way of encouraging us to listen and learn. . In less than an hour, over a thousand Jacobites and 300 Hanoverians were killed.

I thought it was sad that Bonnie Prince Charlie was in so much danger that he was disguised as an Irish spinning maid, put into a boat outside of Benbecula, and taken to Skye for safety. The sea, although rough, was safer than land.

Flora McDonald petitioned for and received a pass to sail from Benbecula to Skye. She was later arrested for her part in Charles Edward Stuart’s escape. While she was subjected to heaven knows what kind of conditions in the Tower of London, Prince Charlie sailed to France.

The castle is a mile north of Grantown-on-Spey. It wasted away over time and was finally restored during the 1990s. Sold in 2006, it was seized several years late for nonpayment and sold to foreign investors in 2014.

One of Scotland’s best salmon fishing rivers, River Spey near Castle Grant offers an incredible opportunity for fly fishing. The River Tay is also an excellent river for fishing. I think that there is a fishing gene that has been passed down from generation to generation. My dad loved to fish!


Where would you like to travel if you received an all-expenses-paid trip? When I get to Scotland, I'd like to stay a night at the Tay Hotel.
Posted by Lori Gunn at 10:15 AM 24 comments:

The weather has turned hot.. very, very hot. Try as I might to think of ice cubes and polar bears, the severe weather alert we're under is overpowering my imagination. Instead of a swimming pool, I think of hot springs like Grand Prismatic Spring in Yellowstone National Park. It is the largest hot spring in the USA! 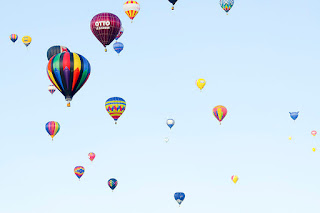 Visualize snowflakes, you say? I'm trying, but they resemble - HOT AIR BALLOONS! That would be a weather phenomenon to videotape and go viral on YouTube. 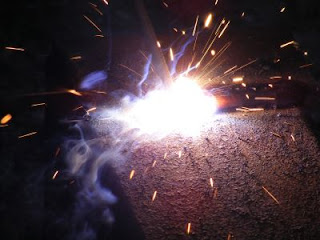 Picture working at a flower shop with cool temperatures and beautiful flowers. Gosh, no, it didn't work. I feel more like I'm watching my father-in-law fire up the arc welder and put heavy plates of metal back together. 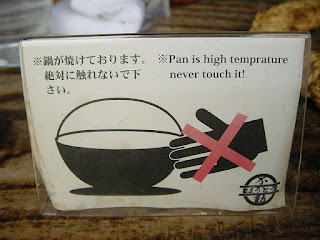 This is a good warning for hot weather. Don't touch it! Back away from the sun. This is a day to stay inside and resist exercise.

In case you haven't guessed, it's


Mother Earth is delivering a lot of surprises this year. Roll with the punches, stay sane, and take care of yourself and your family. Water never tasted so good.

Five Ways to Protect Your Kids from Strangers


We don’t even need to open a newspaper to know kids and adults need to know about and practice defensive posture. Some of the guidelines I learned as a kid and then taught my kids still apply today, even though we’ve changed centuries and millenniums!

I saw a reminder asking parents to teach their kids police officers and firemen help them if they’re in trouble and in some cases, save their lives. It’s definitely a good point. Take the kids on a field trip this summer to meet the public servants who put their lives on the line to keep us safe 24 hours a day.

My dad explained the difference between friends and strangers. Friends are people that parents know and welcome to visit. Strangers are unknown or people they do not know very well, often for a good reason.

One grandma reminded me to play in safe areas and to stay away from alleys and empty houses. My other grandma told me if I wanted to walk somewhere, walk with a friend.

There are a lot of shortcuts in urban and rural areas. My Great-Grandma Foster told me to stick to the main streets when we walked over to see her and avoid empty lots. A shortcut through the meadow resulted in a huge nail through my foot with a 2 x 4 attached. I cried my way home, board and all, so mommy could help me. Mommy was not amused, but she did gather her friends around to help pull off the board, wash the wound, and bandage my foot. I got lectures, cookies and hugs. Hey, as Meatloaf said, “two out of three ain’t bad” – but it could have been.

Explain to your kids why they should never talk to strangers or accept a ride with someone they don’t know, even if their friend knows them. Most of the time, nothing happens if this guideline is ignored. My cousin Lee reminded me I didn’t want to be the exception to the rule. She worked at the juvenile detention center and told me just enough of the horror stories she encountered to keep me following this good advice.

What are some of the rules you learned as a kid that you teach or demonstrate today?
Posted by Lori Gunn at 12:14 PM 30 comments:


Over 2500 5-point stars line the sidewalks that create the Hollywood Walk of Fame.  One of the must-see sights of Hollywood, CA, the stars cover 3 blocks of Vine Street and 15 blocks along Hollywood Boulevard. Literally millions of visitors stroll the sidewalks looking for a favorite star or group.
I had a blast looking at the different tributes to the entertainment industry. Here are some of the ones I saw.

Ever since I was a little kid, there's been a family joke about finding the million dollars tucked safely away somewhere. Helping with housework and yardwork was fun because there was always a chance of finding a clue or perhaps the whole stash of loot!

My hubby and I carried on the saga of the million and used to joke when we'd find a penny or dime that some of it must have spilled out into the open.It's easy to feel rich when you know there's that much money hanging around somewhere.

I was sorting through some old files and tubs to see what could be tossed or sent to thrift stores. I'm one of the "Oh, gosh, just look at this" kinds of people. I get sidetracked debating what to do with things. Sometimes I just put the lid back on or shut the drawer to come back another time.

At any rate, I found a sealed envelope inside one of the files with my name on the front. I slit it open and there it was! The million dollars!  I did a little happy dance and laughed until I cried. I could just see the big Irish smile on my man's face as he tucked away a leprechaun-themed million with a great message for me to discover at a later date.

A new theme for future generations to carry on? It's the gold bars that must be hidden away somewhere.

What family traditions add cheer and laughter to your days?


Today makes me want to wax poetic about sunny skies and warm afternoons in June. Instead, I am just thankful that the incoming thunderstorm and deluge of rain held off until I finished my outdoor tasks. Instead of soaking down the garden spot to plant the corn, peppers, and squash, I'll let Mother Nature do the job.

Black upon grey upon white cloud balloons toss, soar and drift in the sky. The wind blows hard enough to rattle the windows, sway the trees, and drop the temperature. We've postponed putting the large swamp cooler in the front room window until the weather stabilizes. It doesn''t appear it will be needed for the rest of the week! 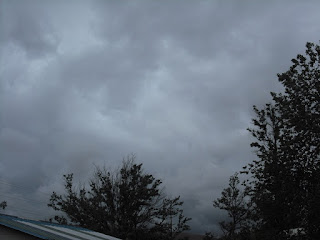 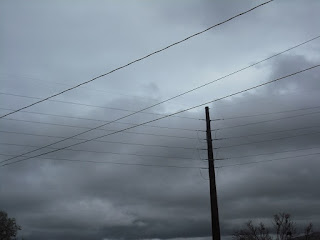 While I was cleaning up some of the large tumbleweeds and plastic bags brought in by last week's storm, I noticed the quail heading for their respective shelters under the huge juniper shrubs. I know they're thankful I've kept the branches low so they have a hidey-hole to crawl beneath for protection from predators, rain, hail, and snow. It makes a doggoned good sunshade, too.


The temperature is expected to drop to 47 degrees F tonight. I'm thankful I haven't packed all the warm blankets away yet.


Thunderstorms cut computer time short, but I'm glad they are holding off for now.

Has the weather changed your daily routine or special plans this summer?
Posted by Lori Gunn at 11:34 AM 18 comments:

Have You Been Flocked?

Disclaimer: This is my "take" on one of the ways Relay for Life in this area encouraged contributions. The American Cancer Society and Relay for Life did not solicit this post in any way nor was I given any compensation for writing it.

Imagine arriving at work or home and finding a flock of hot pink plastic flamingos standing on your lawn! They are accompanied by a yard sign that declares their purpose. 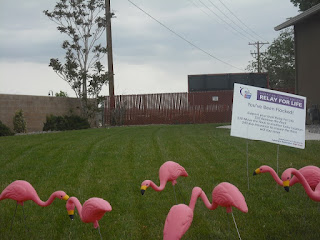 This particular group of fine-feathered  friends traveled their way around my town during May 2015, landing at a business off of Main Street (I know that sounds so stereotypical, but it is truly the name). 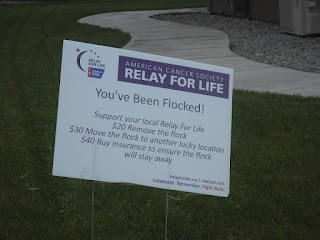 Definitely a worthy cause, the fundraiser for Relay for Life announced the resident/business had been flocked!  There were also directions for having the flock removed or sent to another location!

The devious side of me is thinking about where to send these birds if my turn to get flocked happens next year. Not only will my donation go for a good purpose, I'll have fun making sending the flamingos to someone else's area.

Research to defeat cancer is expensive. Fundraising is an important part of the budget. I've lost several friends and family members of all ages to this dreadful disease. It may not end in my lifetime, but I hope that it is beaten once and for all in my children's lifetime.

Meanwhile, it's good to see a subtle hint combined with a good laugh to encourage community participation in cancer awareness.

What unique fundraising ideas have you noticed in your area lately?
Posted by Lori Gunn at 11:07 AM 28 comments: